Skip to content
The McKinsey 7S Framework was named after a consulting company, McKinsey and Company, which has conducted applied research in business and industry (Pascale & Athos, 1981; Peters & Waterman, 1982). The authors all worked as consultants at McKinsey and Company; in the 1980’s, they used the model in over seventy large organizations. The McKinsey 7S Framework was created as a recognizable and easily remembered model in business. The seven variables, which the authors term “levers,” all begin with the letter “S” 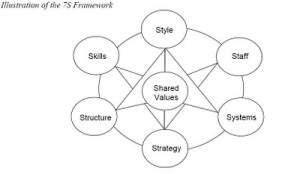 The shape of the model was also designed to illustrate the interdependency of the variables; the illustration of the model has been termed the “Managerial Molecule.” While the authors thought that other variables existed within complex organizations, the variables represented in the model were considered to be of crucial importance to managers and practitioners.
The seven variables include structure, strategy, systems, skills, style, staff, and shared values. Structure is defined as the skeleton of the organization or the organizational chart. The authors describes strategy as the plan or course of action in allocating resources to achieve identified goals over time. The systems are the routinized processes and procedures followed within the organization. Staff are described in terms of personnel categories within the organization (e.g., engineers), whereas the skills variable refers to the capabilities of the staff within the organization as a whole. The way in which key managers behave in achieving organizational goals is considered to be the style variable; this variable is thought to encompass the cultural style of the organization. The shared values variable, originally termed superordinate goals, refers to the significant meanings or guiding concepts that organizational members share.
The authors have concluded that American companies tend to focus on those variables which they feel they can change (e.g., structure, strategy, and systems) while neglecting the other variables. These other variables (e.g., skills, style, staff, and shared values) are considered to be “soft” variables. Japanese and a few excellent American companies are reportedly successful at linking their structure, strategy, and systems with the soft variables. The authors have concluded that a company can not merely change one or two variables to change the whole organization.
For long-term benefit, they feel that the variables should be changed to become more congruent as a system. The external environment is not mentioned in the McKinsey 7S Framework, although the authors do acknowledge that other variables exist and that they depict only the most crucial variables in the model. While alluded to in their discussion of the model, the notion of performance or effectiveness is not made explicit in the model.